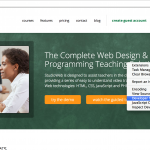 Learn one thing at a time when learning web design.

I recently got an email from someone who felt overwhelmed with all the apps they were trying to learn – learning Photoshop, Fireworks and Dreamweaver all at the same time can do that!

Do one thing at a time says I!

I’ve been there, where it seems there is so much to learn, that it becomes overwhelming. First, don’t make the mistake of believing the tools (Photoshop, Fireworks etc) are the goal – they are not. In fact, once you understand web design (development), you will likely being using 10% of Photoshop’s features … as an example.

That said, it is best to concentrate on one thing, get functional skills and then move on to the next. Jumping around and learning bits of this one day, and a bit of that another day, will just cost you time because you will be constantly shifting gears when moving from one subject/app to the other.

I try to start with the point of the article whenever I can … so what is the best way to learn web design and web programming?

Finishing the Job is Key

It is important that you complete projects. For some reason, leaving something half done, just doesn’t seem to have the same learning impact. That’s why smaller mini projects are great for learning because big projects take a long time to finish.

With that in mind, our Complete Web Designer training package follows these principles … which only makes sense since we created all the courses!

PS: If you want a DVD/USB hard copy sent you, we do that too.

Dreamweaver CS6 – is there an Alternative?

I get asked this every so often:

Is there a cheaper alternative to Dreamweaver CS6? What do professional web designers use?

… Of course there are cheaper alternatives. In fact, there are even FREE alternative that are extremely powerful, run on Windows and Mac and will allow you to build any kind of website you could imagine.

But before I suggest a couple of alternatives, I want to point out that many professional web designers and developers DON’T use fancy programs like Dreamweaver. Many actually prefer to use much simpler programs like for example, Notepad++.

Yes, with the simpler text editors like Notepad++, you have to know your HTML and CSS. But these days, you can’t hide behind programs like Dreamweaver anymore; web designers must understand the code and once you really get into web design, you will actually come to prefer wrangling the code manually than using Dreamweaver’s point-and-click tools.

… More than ever, web design is MUCH more about a deep understanding of code, browser behavior and usability, than it is about design.

Adobe Charges a Big Premium for the Same Products Outside of the USA!

Adobe has now announced that there will be no Adobe CS7 product release for Photoshop, Dreamweaver and the rest of their Creative Suite.

They are moving to a cloud based system where you have to be online to use their products and Adobe has control of the upgrades and updates.

… I wonder what might happen if Adobe releases a bug filled version and you can’t roll back to a working copy?

A New Way to Pay

Beyond that, Adobe has changed the way you pay to use their products, where now you ONLY have the option to pay by a subscription fee. For some people out there, that’s fine, while others (many others) seemed to not be too amused.

From what I am hearing, it seems that the cost of using Adobe products (for many) might as much as double under this new pricing scheme!

What’s getting people even more pissed-off, is that the price can be dramatically different depending on where in the world you live! This is amazing since everything is delivered via Internet … why the difference in price? A quote from the article:

It’s still cheaper to fly from here in Sydney to Los Angeles, buy [Adobe’s Creative Suite Master 6 Collection] there, and come home. By doing that I’d save $601, and I’d get Virgin Australia frequent flyer points, too.

Unlike some companies we know …

… we here at KillerSites.com believe it’s only fair that everyone has the same cost when it comes to any of our training packages and products.

We also believe that some people might prefer to take home and own the video training packages, so even though we have subscription based ‘cloud’ training services (Video Library & KillerSites University), we also offer our courses for purchase via download or even mailed to you on a USB key!

… Being flexible we think is a virtue.

What is the difference between WordPress and Dreamweaver? â€¦This is a question that is popping up a lot … so I figure I should answer it.

First of all, though they look the same from the non-nerdâ€™s perspective, they are in fact very different from each other:

A website built with Dreamweaver can be uploaded to any web server. When you build a website with WordPress, the website and WordPress become one. You need to have WordPress running to run the website, because the website is dynamically being generated by the WordPress engine.

Dreamweaver is like a set of power tools, that can speed up the web design process. WordPress is like a Lego game, where all the pieces are already made, and all you have to do is snap them together.

â€¦ Finally, WordPress is free and Dreamweaver is a commercial product that cost hundreds of dollars.

Read the rest of this article on how-to-build-websites.com I just wanted to announce our new Beginners Dreamweaver CS6 video tutorial course is out! This is a really big one too!

Create a COMPLETE website using HTML5 and CSS3
Learn the new Dreamweaver CS6 Workspace
Get comfortable with CSS3 Transitions
Learn about responsive designs
Cover the basics of HTML: Text, Links, Images, Lists, and Forms
Cover the basics of CSS: ID and Class selectors
Learn all about website layout and typograpy

Check it out on the new KillerVideoStore.com:

Adobe announced that the Flash player will not be produced for Android:

We announced last November that we are focusing our work with Flash on PC browsing and mobile apps packaged with Adobe AIR, and will be discontinuing our development of the Flash Player for mobile browsers. This post provides an update on what this means for ongoing access to the Flash Player browser plugin for Android in the Google Play Store.

Without getting into all the details, Adobe is basically throwing in the towel for the Flash player on mobile devices. This is turn means that Flash on the desktop browser will eventually fade to nothing since people are not going to want to have Flash on their websites knowing that iOS and Android users will NOT be able to see their content.

… And this is why we no longer teach Flash because it seems clear that it will soon become a niche product where the jobs will be few and far between. Yes, this could take years, but already competitors like HTML5, CSS3 and JQuery are taking over.

As predicted, Flash has now gone HTML5 – yes, you can now export your Flash work to HTML5 using the new Flash CS6.

I haven’t had a chance to look at it, so I have no comment with regards to how well it works. Nonetheless, this is more evidence that HTML5 is going to be huge in the future of web design and web development – if it isn’t already!

Flash CS6 basically uses the CreateJS open source framework, to output animations in Flash. I don’t know how powerful this conversion process is yet … we will soon see how complex the Flash projects can be and still be able to output them via HTML5.

Whatever the case, you should still be learning HTML5 and JavaScript.

I created a video blog on this:

It seems that Google and Youtube are moving quickly to replace the Flash video player; they just released a new HTML 5 video player for Youtube that does a bunch of things:

I know the Flash people are going to be pissed at me (again!) for suggestion the obvious: Flash is quickly moving into obsolescence.

Adobe confirmed Monday that it will release one more version of Flash Player for the mobile Web to accommodate Android 4.0, but that will be the final update.

“Adobe will release one more version of the Flash Player for mobile browsing, which will provide support for Android 4.0, and one more release of the Flash Linux Porting Kitâ€”both expected to be released before the end of this year,” an Adobe spokesman said via email. “After that time, Adobe will continue to provide critical bug fixes and security updates.”

I’m all for advancing technology, but this is really vicious!! We now have a group who is actively looking to kill Flash:

Occupy Flash has stepped into the breach with an ambitious goal: “To get the world to uninstall the Flash Player plug-in from their desktop browsers.”

I was one of the first users of Flash in the world – back in the 1990’s when it was called Future Splash. But being a nimble nerd who is language/platform agnostic … I’ve learned to move on from fading technologies, not wanting to fade right along with them. In biology they say the most successful species are the most adaptable; we web nerds have to be ultra nimble too.

Though it will probably take a few years for Flash to fade away into a niche, Killersites has always been about PRACTICAL web training and not getting stuck on a technology. The writing is on the wall, even Adobe is adopting HTML 5 and CSS 3.