For those of you who don’t know much about it, Expression Web replaces Frontpage and as such, you won’t be seeing any new versions of Frontpage.

If you are still using Frontpage and you want to stay in the Microsoft camp (more on that later) then you ought to strongly consider Expression Web 2.

Don’t get me wrong, I am not endorsing Expression Web 2 … and not because I think it sucks, I just haven’t had the chance to really use it to give a confident thumbs-up or thumbs-down.

Instead, this article is meant to give you a quick overview of Expression Web 2 and perhaps give you a little insight into what Microsoft’s new web design tools are all about. 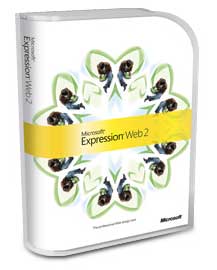 Yes, Expression Web is Microsoft’s replacement for Frontpage … but that’s pretty much all these two programs have in common. Expression Web is far more advanced and it builds web sites using modern standards compliant code.

… If you are a beginner, and ‘standards compliant code’ means nothing to you … just take it to mean that Frontpage did things in an old-school crippled way, a way that Expression Web does not suffer from.

Just a quick look at Expression Web reveals that Microsoft is going head-to-head with the now dominant Dreamweaver. Expression Web has many of the same features and capabilities and targets the same crowd: professional web designers.

Frontpage on the other hand, was more or less geared toward the casual web designer, or perhaps the office employee who had to look after the company website on the side.

Microsoft is really good at visual editors … but they have their own way of doing things!

When it comes to point-and-click wysiwyg programs, Microsoft is the king. But this historically has come at a cost:

… you’re forced to marry Microsoft – a shotgun wedding no less.

About the Microsoft ‘marriage’

Microsoft likes to lock it’s users into their products and it does this by creating interdependencies between all it’s products.

So for instance, if you wanted to use cool feature X in one program, you had to use and own another piece of software from Microsoft. Many times, these interdependencies we’re artificially created by Microsoft so as to lock you in.

… Nerds call that ‘vendor lock in’ … and it pisses off many nerds to no end. I am one of them.

That said, I can’t say right now IF that is the case with Expression Web. It looks to me (based on a superficial glance) that Expression Web 2 does indeed favor Microsoft ASP.net but that is not necessarily all that bad … depending how well Expression Web supports PHP.

Again, based on a quick look:

To answer a question: what are Microsoft’s new web design tools about?

In a nutshell, to compete with Adobe’s line up of web design and web development/programming software. Microsoft has their own Flash like software ‘Silverlight’ and their own image editors, video encoders etc …

In fact, Microsoft has a whole suite of programs sold together as the Expression Studio. This package includes:

I will be getting more into this in other articles. For now, just understand that you have two camps to choose from: Microsoft vs. Adobe

… and there are implications to going with one camp or the other.

… Microsoft’s wants to ‘encourage’ you to use Silverlight – Microsoft’s Flash competitor,.

You can learn more about Expression Web 2 at Microsoft’s website.

Don’t worry, we will soon have unbiased reviews and tutorials coming out on Expression Web 2.

This entry was posted on Tuesday, June 17th, 2008 at 2:30 pm and is filed under Expression Web, News, Web Design. You can follow any responses to this entry through the RSS 2.0 feed. Both comments and pings are currently closed.