The boys and girls at Adobe recently released a public beta of Dreamweaver CS4 – and so now, I can freely talk about it!

I’ve been beta testing Dreamweaver CS4 for a little while now and I’ve been looking forward to spewing my nerd impressions. I had to hold my tongue until Adobe released DW CS4 to the public …

In this article, I provide a quick overview of what’s in CS4. But don’t worry, in soon to come articles and video tutorials, I will be digging deeper.

News:
Since I wrote this article, I’ve put out a few FREE Dreamweaver CS4 video tutorials that demonstrate some of Dreamweaver’s new capabilities. You can find them here:

It’s pretty cool overall. Beyond the general improvements, there are a few really nice features that make Dreamweaver CS4 a worthy upgrade:

Each of the above features are so important that I will be creating a video tutorial for each of them.

A new look and feel 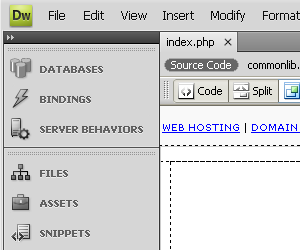 Dreamweaver is 10 years old and understandably, some of the things that made it into Dreamweaver turned out to not be so useful. So, Adobe made the smart decision (IMHO) to dump the crap so that they could concentrate and new stuff. From Adobe’s site:

Dreamweaver recently celebrated its 10th birthday with the Creative Suite 3 launch, and after a decade of development there are many features in the application that require significant resources to maintain release to release, but aren’t being used with significant frequency. Correspondingly, we’ve recently made some difficult decisions as a tradeoff between continuing to support infrequently used features vs. developing new features to both streamline key web design and development workflows and support newer technologies and development models.

So what did they remove?

… Makes sense to me.

Adobe has got their collective ear to the ground and so they picked up on the fact that Ajax and Javascript are very important to web design these days – Web 2.0 anybody?

… Just in case you are relatively new to the web design world, just understand that Ajax and Javascript are the keys to all the fancy new web wizardry that you see on sites like Google Mail.

So far, I have to say that I like Dreamweaver CS4. The cool new features combined with the more flexible and versatile user interface, makes it easier (and maybe even a touch more fun) to build websites.

PS: did I mention that I have new videos coming out on Dreamweaver CS4?

This entry was posted on Tuesday, July 15th, 2008 at 1:14 am and is filed under Dreamweaver, News. You can follow any responses to this entry through the RSS 2.0 feed. Both comments and pings are currently closed.