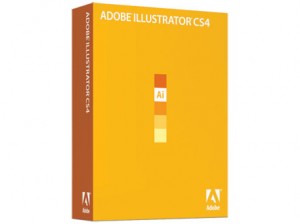 At version number fourteen, finding more features to improve the already near-perfect Illustrator app is probably quite the challenge for the developers at Adobe. Yet, they’ve managed to do it again and we’ll go into these features in just a moment.

The basics about Illustrator: it’s compatible with both Mac and Windows, has a bevy of add-ons, plug-ins, and tutorials to choose from that will enhance your user experience. If you’re new to drawing, you’ll find help in the form of books, forums, how-to articles, and even videos. For the more seasoned users, if there’s something you want to do, there’s probably a (third-party) plug in for that. It’s a heavy app so make sure your hardware meets the requirements listed on Adobe’s page.

The catch is that Adobe Illustrator CS4 is unlike raster-based digital arts programs; Illustrator is vector based and therefore not designed to simulate the behavior of traditional media. If recreating an artist’s studio is what you’re into, then go straight for Corel Painter 11. To understand the differences, first know that vector based programs (like Illustrator) represent images and graphics in terms of mathematical formulas. Raster based programs represent images by their pixels, the individual points of color that collectively make up your image. The only thing you need to take away from these differences is that vector images, thanks to their mathematical properties, can be resized again and again without degrading. Raster images when scaled will lose clarity but raster graphics are much better for color-rich things like photographs.

With that said, Adobe Illustrator CS4 is a powerful graphics program and integrates seamlessly with the rest of the Adobe production suite (Photoshop, a raster based program, InDesign, and Dreamweaver).

For those who have already used Adobe’s products, the user interface is very similar so you won’t have a lot to learn. I find the interface intuitive, even without much training in the software and like the “tabbed” appearance.

This version seems streamlined. For example, the new Appearance panel merges several panels you would have had to use separately in the past and gives a one-click access to editing your selected object. There have also been some definite improvements with the gradient tool from previous versions.

Probably the best improvement to the new Illustrator is the ability to work with multiple pages and the new Artboard tool. Basically, cropped areas become new Artboards and each Artboard is treated as a separate page. There are still some things Adobe needs to figure about this approach, but it’s definitely a good, much-anticipated feature. 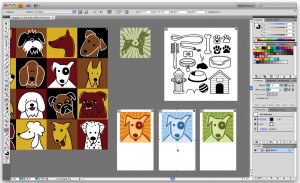 Another great improvement is the new Blob brush tool. It can best be described as an “intelligent” brush, one that is pressure sensitive and merges with other (same colored) objects to create one seamless path. You can even use the Eraser tool with it.

Features to Write Home About…

Aside from the previous mentions of the new multipage Artboards and the Blob brush tool, here are some fun tidbits of the new version.

This tool, which doesn’t have an official name, allows you to view your image on screen, as someone who is colorblind would see it. Why is this important, you might ask? Well, other than the entertainment value, it allows you as a designer to see the contrast (or lack of) in your image and whether the almost 8% of colorblind people will see it clearly enough.

If you need a program that will improve your productivity, allow you to manage multiple files, has an entire slew of plug-ins and teaching resources available to help you, then Adobe Illustrator is for you. $599 without upgrade, that’s a bit steep but if this is what you’re doing as a living, you’ll want Illustrator. Upgrade is only $99.

You’re going to need a lot of RAM! Don’t skimp when it comes to using Illustrator.

This entry was posted on Monday, October 5th, 2009 at 3:50 am and is filed under News, Photoshop. You can follow any responses to this entry through the RSS 2.0 feed. Both comments and pings are currently closed.